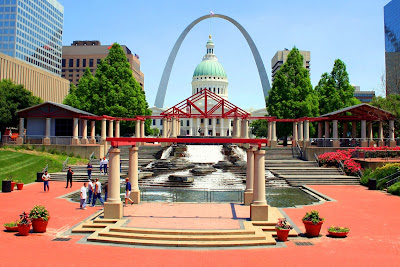 October 2013 rating will be used 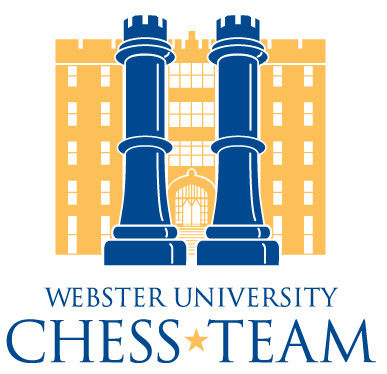 Imagine Dizzy Dean, Stan Musial, Bob Gibson, Lou Brock, Ozzie Smith, and Albert Pujols all playing for the Cardinals at the same time. You might not know it, but the Webster University chess team has just that sort of ridiculously powerful roster. Composed of grandmasters from around the world, the team is a murderers’ row of chess minds, and they’ve made it to the President’s Cup, a.k.a. the Final Four of College Chess, to be held this month in Rockville, MD. Coached by former world champion Susan Polgar, this squad is, to be blunt, expected to dominate. 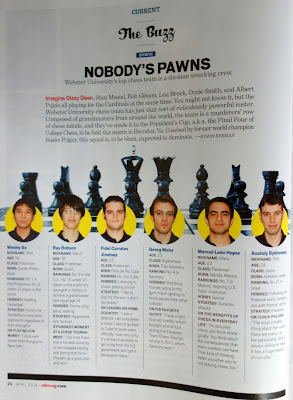 Rankings: No. 1 in the Philippines; No. 3 under-21 player in the world Hobbies: Reading, basketball Favorite country he’s visited to play chess: China Strategy: Known for the ability to neutralize opponents regardless of their strengths
On playing for money: “I once won dinner from this guy in New York.”
On his opponents’ expressions: “If I’m playing against an inexpert player, I can sense fear, but it doesn’t happen often.”
On dressing strangely for a tournament: “I had to wear sunglasses because of sunlight coming through the window at my last tournament.”

Rankings: No. 8 in the U.S.; No. 10 under-21 player in the world; the youngest in US history to achieve a grandmaster ranking at age 14 Hobbies: Tennis, ping-pong, reading Favorite countries he's visited to play chess: Switzerland and Norway Strategy: Aggressive and tactical
On his strangest moment at a chess tournament: “One time there was a tornado warning, so we stopped playing, and during that time I thought up a good plan and won.”
On foods to avoid: “I don’t drink lemonade at matches because for some reason that makes me have to go to the bathroom more.”

Ranking: No. 3 in Cuba Hobbies: Listening to music, playing soccer Favorite country he's visited to play chess: Spain Strategy: “I like to play for the win—I don’t like draws.” On leaving his home country: “I am a defector. I am considered a traitor. I cannot go back to Cuba for seven years, officially. I was very lucky; it’s almost impossible to get a visa from the U.S. government, but I got it because of chess.”
On once beating a chess hustler: “One time I was in Hungary in a train station, and a very old man with a chessboard challenged me to play a game. He didn’t know I was GM [Grandmaster]. He said ‘one Euro per game.’ I said no. He kept asking me, until I said yes. I played two games and beat him twice, but let him keep his money.”
On coach Polgar: “She is very nice, like a mother for us [on the chess team]. She really cares about us. We can tell her anything.”
On superstition: “All chess players are superstitious. Sometimes, I use the same pen to write my moves for all the games, and when I lose with that pen, I switch. Even the way I brush my hair before games is superstitious.”

Ranking: No. 4 in Germany Hobbies: Watching movies, going to the gym, travel, getting to know people from other cultures Favorite city he's visited to play chess: San Francisco
On his favorite outfit: “I have a light blue zip-hoodie, which brought a lot of luck during the European Team Chess Championship in 2011, which Germany won.”
On dirty pool: “A few years ago I was playing a Super Tournament in Germany, and there was one game which I really wanted to win. When I got close and it started to look like it was time for my opponent to resign, he suddenly started to shake the board as well as his whole body. It was extremely annoying and it happened several times during that game. The game lasted for eight hours and ended in a draw. I think I’ve never been so upset in my life as I was after that game.”

Rankings: No. 1 in Mexico; reigning U.S. Open champion Hobby: Soccer Favorite country he's visited to play chess: Italy Strategy: Dynamic attacks
On Webster besting Harvard, Yale, etc., on the way to the Final Four: “This is just my first time playing on a team for Webster, and it’s important for us to beat such prestigious universities.”
On the benefits of chess in everyday life: “As you play chess, you think strategically. You think about the consequences that every position can have. That kind of thinking helps you when you’re not playing chess, too.”

Ranking: No. 21 in Israel Hobbies: Following the financial world, hanging out with friends, sports Favorite country you’ve visited to play chess: Norway Strategy: Flexibility
On his strangest moment at a chess tourney: “In Russia, in the last round of a tournament, some of the players decided to start celebrating before the end—by drinking alcohol.”
On opponents’ weird techniques to distract him: “I played against a guy who colored his hair red before the tournament to mess with his opponents. We finished in a draw. It didn’t work for him then, but over the long term it did—he’s number three in the U.S. right now.”
On coach Polgar: “The most notable thing about her—and there are many—is her personality. She’s always willing to help. It has a huge impact on our play.”

SPICE talk at the Walker School of Business & Technology

This is a friendly reminder of our upcoming Faculty and Staff meeting on Thursday, March 21, 3:00 - 4:30PM (EAB 253/262). We will be joined by Grandmaster Susan Polgar who will talk about SPICE (Susan Polgar Institute for Chess Excellence) and share her experience running the Institute. We hope that her presentation will help initiate an interesting discussion on potential ways in which the Walker School and SPICE can collaborate.

Please RSVP to ekaterinahill19@webster.edu by next Tuesday, March 19. 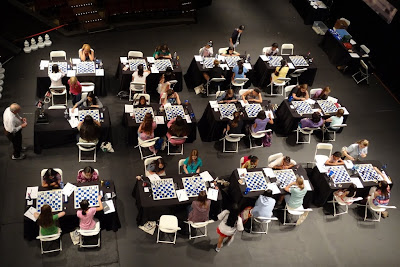 - Webster University will provide complimentary room and meal accommodation on campus for qualifiers!

The annual Susan Polgar Girl’s Invitational, the most prestigious all-girls event in the United States, will be held at Webster University (St. Louis, Missouri).

• There will be an intense training session with Susan Polgar, followed by a 6 round (g/90+30) championship tournament.
• The traditional Blitz, Puzzle Solving, Bughouse events will stay the same as in previous years.
• There will be many chess prizes awarded, including iPad mini, and scholarships to Webster University.

Exception: If a player graduates from high school early and is already attending college, she may still represent her state if nominated. This is the decision of each state affiliate.

VERY IMPORTANT NOTE: The participants of the Susan Polgar Girl’s Invitational DO NOT have to be high school students. Any qualifier under the age of 19 (by July 25th of the year in which the tournament is held) is eligible!

Special invitation for this year only: All past participants of the SPNI and SPGI (Susan Polgar National Invitational/Susan Polgar Foundation Girls’ Invitational 2004-2012) are invited to participate in the 2013 SPGI. The idea is to have the past participants learn my method of training so they can go back home and share their knowledge with the younger players. However, registration MUST be made ASAP since space is limited. There will be mutual training sessions for all, however separate section & prizes for alumni participants over the age of 19.

Players are required to furnish the organizer an emergency phone number and the e-mail address of a parent/guardian.

There is no entry fee to participate in the 2013 SPGI; however, players are responsible for their own travel. For all state representatives, and qualifiers from the SPNO or SPWO, Webster University will provide complimentary room and meal accommodation on campus.

For alumni participants, wild card/special invites, coaches, parents, or other family members, inexpensive accommodations are available for housing and dining on Webster’s campus. Please note that all reservations and registrations MUST be made (and accommodation expenses prepaid) no later than June 25, 2013.

Prizes: Trophies / plaques will be awarded to the winners of the Susan Polgar Foundation Girl’s Invitational Puzzle Solving, Blitz, and the SPGI Championship. Co-champions are recognized in the case of a tie, with each champion receiving a Champion’s Plaque or Trophy. The Champion (or Co-Champions) will automatically be invited to defend her/their title (must meet age requirement).

* The scholarship must be exercised no later than the Fall of 2016.

The New Polgar Committee’s goal is to have all 50 states (including two representatives for California, two for Texas, and two for Missouri) and the District of Columbia represented. We strongly encourage each state and the District of Columbia affiliate to hold a scholastic championship tournament to determine each state’s champion and representative. Failing this, rating criteria may be acceptable. A scholastic girls’ champion or the highest rated girls’ scholastic player in a state who has no state affiliate of the USCF should contact the Polgar Committee as soon as possible.

Susan Polgar and/or the Polgar Committee and its members may elect to award wild cards each year for the Susan Polgar Girl’s Invitational.

Special qualifying events: The Polgar Committee will award automatic qualifying spots to the reigning winners in each section of the annual Susan Polgar NO for Girls (New Orleans) and the Susan Polgar World Open for Girls (Chicago).

NOTICE TO ALL STATE OFFICIALS: Please send the nomination from your state to the Polgar Committee (PolgarCommittee@gmail.com).

The Susan Polgar Foundation can be contacted at 806-281-7424 or through info@PolgarFoundation.org.

BIG THANKS to President Dr. Beth Stroble and Webster University for hosting and sponsoring this very prestigious event for girls!

* Scholarships may be upgraded but may not be stacked. For previous winners of partial scholarships, a maximum of $1,000 per year may be added to the previous scholarship.
Posted by Chess Daily News at 3/10/2013 11:21:00 PM No comments: