As Webster’s Department of Public Relations looks back on the past year, we compiled this list of Top Webster Stories of 2012. The stories we selected highlight a few of the many accomplishments and recognitions that reinforce Webster’s mission and core values, and that support our goal of achieving global academic and operational excellence.

In the News: Chess, SPICE Get Webster National Attention

The bold move by Webster University and champion chess Grandmaster Susan Polgar to move her Susan Polgar Institute for Chess Excellence (SPICE) to Webster gained widespread attention throughout the year. From NPR’s “All Things Considered” show, to the New York Times, Wall Street Journal, USA Today and the UK’s Daily Mail, hundreds of media outlets shined the spotlight on Webster around the country.

The article quotes Polgar describing some of the rationale for moving her institute and entire champion chess team to Webster: “St. Louis today is the center of chess in America. It just seemed like a perfect fit.” Likewise, the students on her team — who hail from places as far and wide as Brazil, Germany and Iran — are quoted.


The AP story also captured Webster University Provost and Senior Vice President Julian Schuster‘s excitement: “He envisions a broader academic focus revolving around chess, espousing a ‘dream of connecting chess as not only a game but as a didactic tool, to apply in a learning setting.’” 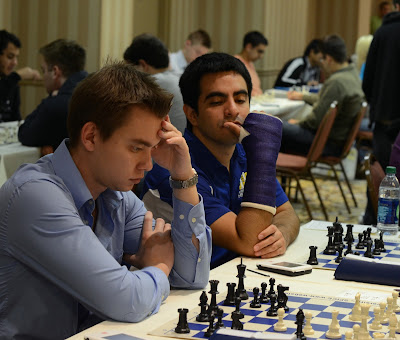 While many will be spending the last week of December on holiday break, the Webster University chess team will be pursuing another title.

It’s already been a fantastic first year for the chess team, both on individual and team levels. Members of the team have shined representing Webster as well as their own countries throughout the year.

Now they hope to cap this banner year off as the top-ranked college team heading into the 2012 Pan-Am Intercollegiate Championship Dec. 27-30, 2012, at Princeton University.

Also known as the “World Series of College Chess,” this tournament will feature more than 30 top college teams vying for the national title. Webster will send three teams to the tourney.

The top four finishing teams from the Pan-Am will qualify for the Final Four, which will take place around the beginning of April 2013 in Washington, D.C.

The first PanAm Intercollegiate Chess Championship took place in New York all the way back in 1946, but Webster University will be the first team in history to enter the World Series of College Chess as the #1 seed in its first year competing in this event.