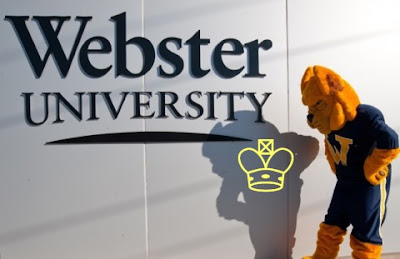 Texas Tech University upset the collegiate status quo in April 2011 by winning the "Final Four of Chess," ahead of annual superpowers University of Texas at Dallas (UTD) and University of Maryland, Baltimore County (UMBC).

Texas Tech may yet win again in 2012, as they compete in another Final Four, against UTD, UMBC, and surprisingly, New York University for the 2012 collegiate title.

But the future is quite cloudy for the Texas Tech team, in light of the recent news that coach Susan Polgar and ten of her top players are all leaving Texas Tech. GM Polgar and the players, comprised of eight GMs and two IMs, are coming to Webster University in suburban St. Louis.

Suddenly, Webster University, which previously had no organized chess activity on campus, will have one of the nation's strongest teams, if not the top-ranked team in the country.

As Dylan McClain wrote in the New York Times (Feb. 14, 2012), "Imagine if a university without a basketball program recruited Mike Krzyzewski, the legendary coach at Duke University, and not only managed to hire him but also persuaded most of his team to switch with him. In essence, that is what Webster University in St. Louis has done by hiring Susan Polgar, the head of the Texas Tech chess program."

While it has not been explicitly stated why Polgar is leaving Texas Tech, it appears that funding for the chess program is at the heart of the matter. As a public university, Texas Tech has constraints on how much money it can devote to the many extracurricular programs on campus, and the presumption is that they simply weren't able to provide the level of funding necessary to maintain the program and recruit student players at the level Polgar desired.

Polgar declined to comment on the impending move at this time. But Dr. Julian Schuster, provost and senior vice president (chief academic and chief operating officer) of Webster University, was very generous with his time. While most of the chess world is likely unfamiliar with Dr. Schuster, I believe that people will find him to be a very engaging and dynamic individual, an excellent advocate for collegiate chess.

He was a chess fan before he was an educator

Asked to describe how Susan Polgar and her team found their way to Webster University, Schuster underscored his own love for chess.

"There is an objective story, and there is a personal component of that story," he began. "The personal component of that story is that I grew up in the former Yugoslavia, where chess was a powerful game. Each and every one of us grew up around chess. By doing that, you learn that chess is more than a game. Chess is a way of thinking; it has a direct application to the decision-making process. When I became an educator in my mature life, I still felt the connection because I was playing. I can say I'm a casual player. I would describe myself as having an understanding of chess. A number of my friends are grandmasters; I am a friend of Mr. Gligoric.

"For me, combining chess and education was always something that I was interested in. I was trying to do that in my previous academic appointments, but there is always something more urgent, and another fire that you need to put out, instead of building something.

"Coming to Webster, a mutual friend for me and Susan Polgar, a grandmaster who lives in Texas, brought to my attention that Susan might be leaving Texas Tech. Susan and I exchanged a couple of phone calls, and one thing led to another. As a result, we ended up with Susan coming to Webster.

"We didn't have a chess club, but we have had people among the faculty and among students who wanted to play chess. Instead of starting with a chess club where people would just come to kill time, we wanted to do this in a more strategic and purposeful way, and our association with Susan will allow us to do that."

I was interested in hearing a bit more about Dr. Schuster's connection with the former world-class player Svetozar Gligoric.

"I'm close – we know each other," he said. "He was already old when I was starting to play chess. Don't tell this to Svetozar if you ever come across him! I met him when I was a kid. We also met when he was in Montreal twelve years ago. I was a guest in his house. We had wonderful conversations about chess. Of course, I live here, he lives over there, so we lost contact.

"For all of us who grew up in the former Yugoslavia, two players had a formative influence on all of us – Gliga and Luba [Ljubomir Ljubojevic]. Luba I knew when he was playing speed chess in the local clubs. That was an event in itself, because he was playing with forty-five seconds against five minutes against masters, and he wasn't losing any games."

Schuster didn't discuss a specific budget for the chess program, and it's possible that this is still in flux, but he shared an interesting economic viewpoint. "People ask how much money we will spend. Throughout my life, I have much more concentrated on the benefits of something than on costs of something. There are costs of setting up the program, especially if you are going to be associated with arguably one of the greatest female chess players in the history of the game.

"We are going to give scholarships to the kids, but all of those kids have phenomenal GPAs and brilliant scholastic achievements. So they would qualify if they had independently decided to come to Webster. They would all qualify for a substantial – the top – package that we offer. There is a marginal cost of bringing them in, because we are giving them a little bit more than if they only had scholastic achievement.

"We will help them to come here to play chess, to socialize with other people, and to achieve their goals. On the other hand, we also have the costs of running the program. In the first year, we are going to fund that from our budget, but both the president and myself will absolutely do everything we can to popularize the program, and to master the elements that will allow us to make this even a better enterprise than it is.

"So yes, we have invested some money. This is going to be a strategic investment. As they say, 'no money, no mission.' We are not shying away from that. We are not going to say it was a fortuitous thing, and we're just running it for nothing. On the other hand, we are convinced that the benefits for the students of Webster University, for Webster University, and for the greater St. Louis regional area, as well as for the chess in the United States would be enormous because of this type of program.

"We do count on the support of various sources, which are going to enable us to make this a sustainable enterprise."

At Webster University, Polgar will have the title of Executive Director of SPICE (Susan Polgar Institute for Chess Excellence). Her husband Paul Truong will be managing marketing efforts for SPICE. Polgar and Truong begin work there in June, with her annual girls' tournament taking place sometime in July.

Asked if Polgar will hold open tournaments on campus, Schuster quickly replied, "I sincerely hope so. I am not going to play, because I don't need to embarrass myself, but absolutely yes. We will organize a simul. I didn't say this to Susan, but I will not take 'no' as an answer. I will try to bring Svetozar here, his health permitting, as the oldest living grandmaster, to be a special guest, and maybe to give a simul.

Polgar has stated that one of the elements that attracted her to St. Louis was the proximity of the Chess Club and Scholastic Center of St. Louis, which has quickly become the epicenter of U.S. chess. I asked Dr. Schuster if there was any formal involvement between the chess club and Webster University.

"No, there isn't. We do not have any formal involvement with the St. Louis chess club, but that doesn't mean that we cannot have it down the road. I believe firmly that cooperation is better than competition, but I also believe that a healthy competition is healthy.

Virtually at the same time that Webster University announced its acquisition of SPICE, Lindenwood University, also in suburban St. Louis, noted that it too will be starting up what it hopes will become a strong chess program, beginning this fall.

I asked Schuster if there had been any coordination between the two programs, but it appears that both universities undertook their chess initiatives independently, and without knowledge of the other's plans.

"No, there has not been any coordination," Dr. Schuster explained. "I didn't know about their program. It was a surprise, but a pleasant surprise that another university is contemplating entering into this arena, and that actually validates the concept. So I think that's great."

The success of SPICEIn the first year of competing in division I, the SPICE - Knight Raiders earned a spot in the College Chess Final Four, finishing in 3rd place, ahead of UT Dallas.

In the second year competing in division I, the SPICE - Knight Raiders won the College Chess Final Four ahead of UT Dallas, UMBC, and UT Brownsville, and became the first bottom seed team in history to win the biggest prize in College Chess.

In the third year of competing in division I, the SPICE - Knight Raiders is ranked as the #1 College Chess team in the United States (with 5 GMs and 2 IMs) and will look to defend its title on March 30 - April 1 near the nation's capital.After the first full year of the SPICE program, the Knight Raiders gained about an average of close to 100 rating points! In addition, members of the Knight Raiders have a grade point average of approximately 3.35 - 3.40.In a stretch of about 6 months starting the summer of 2010, the SPICE program produced 3 Grandmasters, Kuljasevic, Antal, and Papp. The legendary SPICE tournaments (5 SPICE Cup and 3 SPICE Spring Invitational) also produced GM and IM norms (Finegold - GM title, Rensch - IM title, Yang - all 3 IM norms and title, Hess - GM norm, Mogranzini - GM norm, Antal - GM norm, etc.).And after the first four full years of competition, the SPICE warriors won a total of 14 national, 2 state, and 2 regional titles!

Now the SPICE program is making history again by fielding the #1 team in the country for Webster University in St. Louis starting in June 2012 with 8 GMs, 2 IMs, 1 FM, and 1 WIM so far with more in the process of applying

. Here are all the SPICE titled players so far by the order of joining the program: 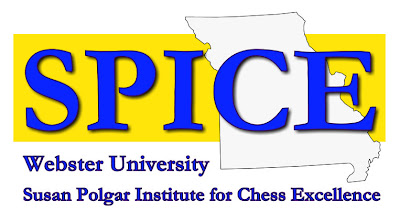